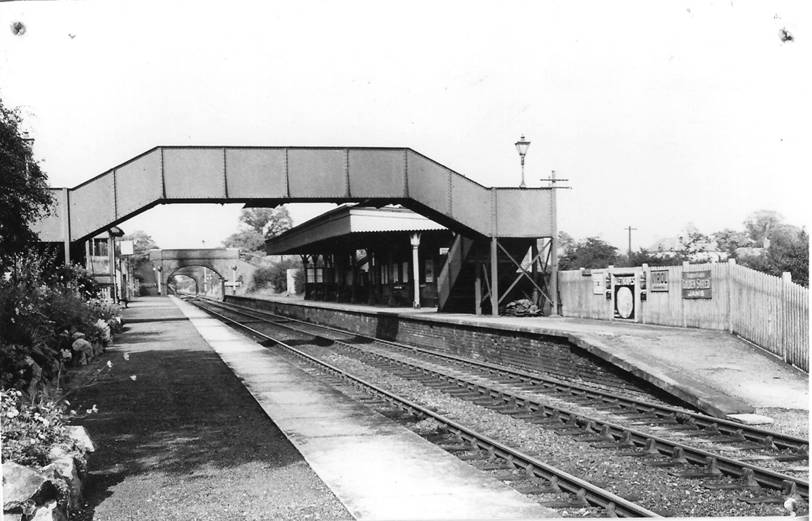 Dr Nigel Watson, of the Bricket Wood Society, and also one of our Trustees, has very kindly collated these assorted memories of Bricket Wood station over the ages. Enjoy!

Opening of the Branch Line

“My grandfather was one of the navvies that helped to make the Watford to St Albans branch line and when it was finished it was a very exciting day when the first train left Watford for St Albans. My grandfather’s workmates were all dressed up, in white spats and gaiters and round frilly wide-brimmed hats and light coloured trousers. St Albans station was decorated up for the occasion.” 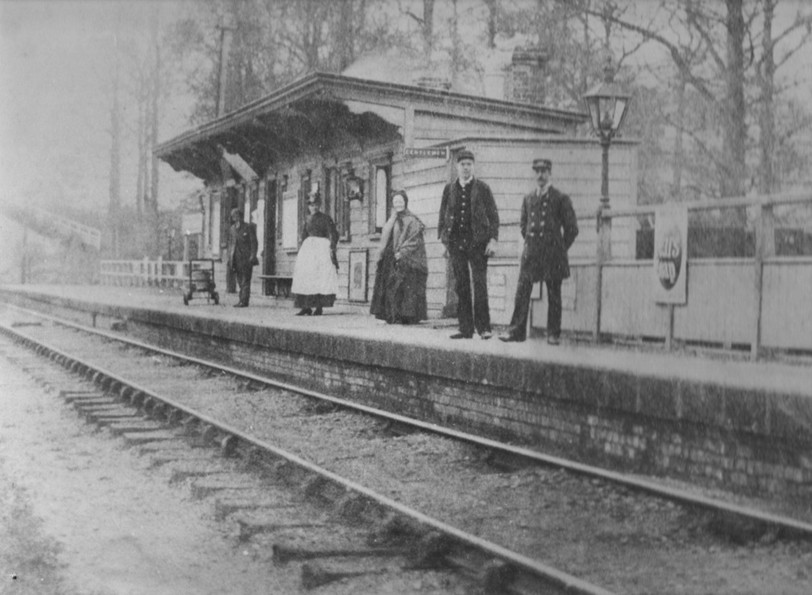 An interesting view of the original wooden station building c. 1890, which was situated a few yards to the north of the later, brick-built structure.

There were five staff at Bricket Wood Station – 1 Station Master, 2 Signalmen, and 2 Porter/Signalmen. The Station Master and Signalmen lived in the cottages opposite Drop Lane which were at the end of the station platform.

The station used to have six sections; Goods Parcels Shed, Booking Office, Booking Hall, Ladies’ Toilet, Cycle Room and Gents’ Toilet. At the end of the platform were the Cattle Dock and the Coal Yard. Lady Yule’s horses were often transported by train and a special siding was made near the bridge (now demolished) to the cattle dock. The horses were then unloaded from the horse box through the cattle dock and directly on to the train.

Newspapers were sent from Watford Junction to Bricket Wood and delivered to the Booking Office. The local people would call for them, but only the well-to-do people had newspapers.”

“In 1940 I started to be trained for four months as a porter/signalman at Bricket Wood Station. The rule book had 25 rules and regulations which I had to learn before I qualified as a porter / signalman.  There were two porter/signalmen at Bricket Wood Station and I worked two shifts, either 6a.m. to 2p.m. or 2p.m. to 10p.m. When I was on the early shift I worked in the Booking Office until 9a.m. then I had a 1 hour meal break. After the break I cleaned the Station and put lamps in the signals. This was called lamping. We dropped newly filled paraffin lamps in a box in the signals. They were renewed once a week. I relieved the signalman between 1-2p.m. When I was on late shifts I worked the signals between 2-4p.m. when the late turn signalman came on duty. He would work till midnight. In 1945 I had the job as full-time signalman.” 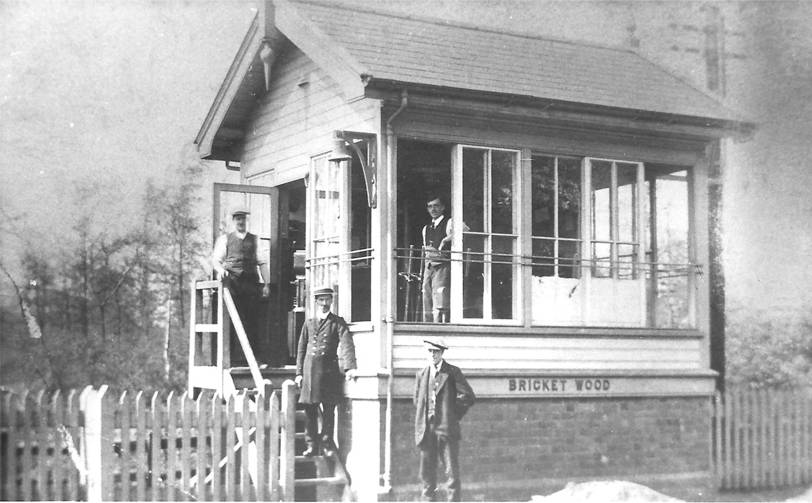 A fireman who had worked on the local railway line said “Hot coals from the train provided fires for the signal box.”

“One of the highlights of the Sunday School Year when we were children was the Annual Treat, the most popular venue was Bricket Wood. We went by special train, straight through to the lovely little Bricket Wood Station where the staff won the competition every year for the Railway Best Kept Station Garden. Rambler roses covered rustic supports and masses of lovely flowers looked absolutely delightful.”

“The station was kept in perfect order. There were flowers on the banks tended by the railwaymen. The station used to be decorated at Christmas time with holly; in the winter the Waiting Room had a roaring log fire.”

“…Bricket Wood Station waiting room had pictures on the wall…”

“The station was a social centre. In cold weather a lovely fire and at Christmas decorated with holly and evergreens. The station master was very pleasant and sociable and his staff also. They knew their regular customers and during the rush hours, especially when people were travelling to work, would keep the train waiting and even go out into the lane to see if they were coming.”

“The steam trains ran on a single track from Watford to Bricket Wood and from St Albans to Bricket Wood where they met to pass on the only section of double track. The staff were very friendly and casual. The station master would dash out into the lane to hurry latecomers so they did not miss the train to work. The station was so pretty with roses and flowers and the name of Bricket Wood in rustic work. There were two bridges and two waiting rooms. At Christmas it was decorated with holly and also had a fire during cold weather.”

“Before World War II all roads were unmade except for Mount Pleasant Lane and Lye Lane. In winter the puddles were so big you could hardly walk. Nearly everyone wore wellingtons. The station staff let you leave the wellingtons in the waiting room if you were travelling by train. The Snicket was impassable in winter because horses used it then.”

“I can remember during a very cold blizzard at the beginning of the winter 1914-15 a cyclist was stranded and decided to walk the track to Bricket Wood when he found a big tree had been blown down across the line. He saved the train by putting the signal at red. He was thanked and taken to court for trespass and fined £5.”

“At Willesden Junction Station the Sunday Schools’ Special train came in with whistle shrieking, accompanied by loud cheers from the crowded platform. The driver had entered into the spirit of the day and decorated the engine and tender with streamers and balloons. The front of the engine had even been made into a face with the aid of coloured chalks. Our destination was Bricket Wood…..”

“Bricket Wood Station was a very busy place. Thousands of people all the summer were going to Gray’s fair, two excursion trains in at the station together.”

“We had two fairs at Bricket Wood. One was owned by Mr Gray and the other by Mr Christmas. They opened about Easter and closed about September… Thousands of people used to come to the fairs. They came by coach or train every day of the week. Ticket collectors would stand on top of the bridge and collect the tickets in buckets, there were so many. People left the platform by the approach on the Handley Page side of the station.” 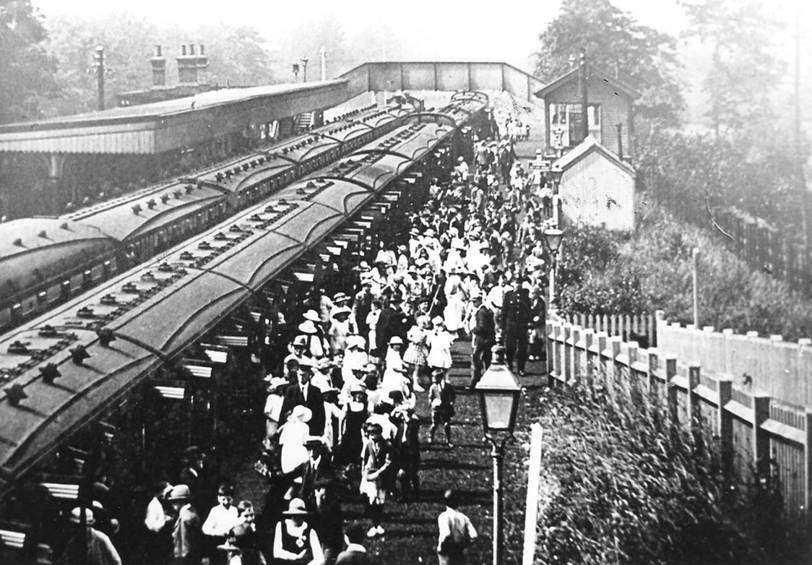 This photo shows the sheer volume of people using the station just prior to the outbreak of the Great War, 1914.

” The Station’s two platforms were crowded with Sunday Schools and Firm’s outings, and char-à-bancs coming and going. We often saw Pearly Kings and Queens in their traditional costumes. The East End children were so excited at seeing wild flowers, that armfuls were eagerly picked, some snatched hastily from local gardens, but the flowers looked so bedraggled by the time the children were due to go home.”

“… The station master had a huge brass bell that he used to ring when a train was due so that the visitors to the fair knew when it was time to leave.”

Filming at the Station

… “The film [Victoria the Great] was made in 1937….The film makers converted Bricket Wood Station to look like Euston as it appeared in the 1840s. Several actors who were famous at the time were to be seen round Bricket Wood. For extra atmosphere the film makers used an ancient loco called ‘Lion’ which was on display at Liverpool Station.” 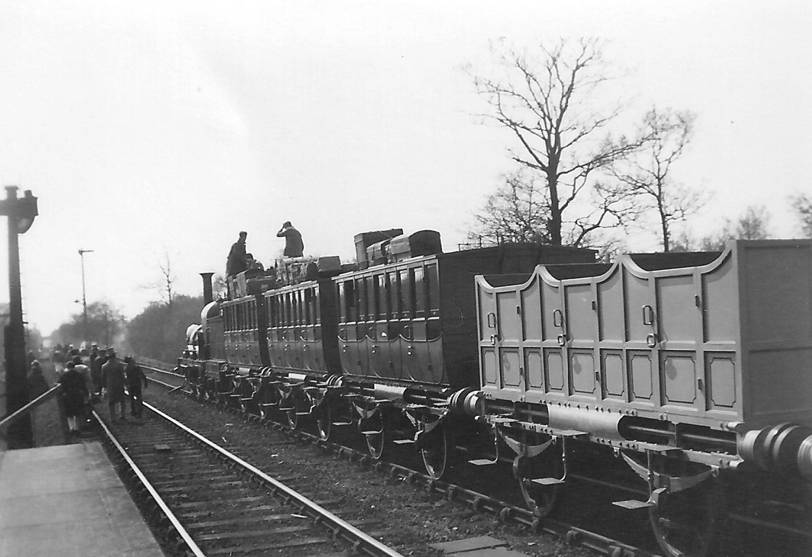 The extraordinary scene of ex-Liverpool and Manchester locomotive ‘Lion’ and its train of replica carriages taking part in the filming of ‘Victoria the Great’ in 1937.

Commuting from the Station

“… the railway was a single line, with up and down trains (steam engines) meeting at Bricket Wood and the drivers exchanging batons before they could leave. The 7.55a.m. train which I caught to go to school used to go straight through to Euston, arriving at Willesden Junction at 8.40a.m. I had to change at Watford on the way home, but the trains were always punctual. There used to be a fire in the winter in the waiting room and the station master lived in the station cottages nearby.” 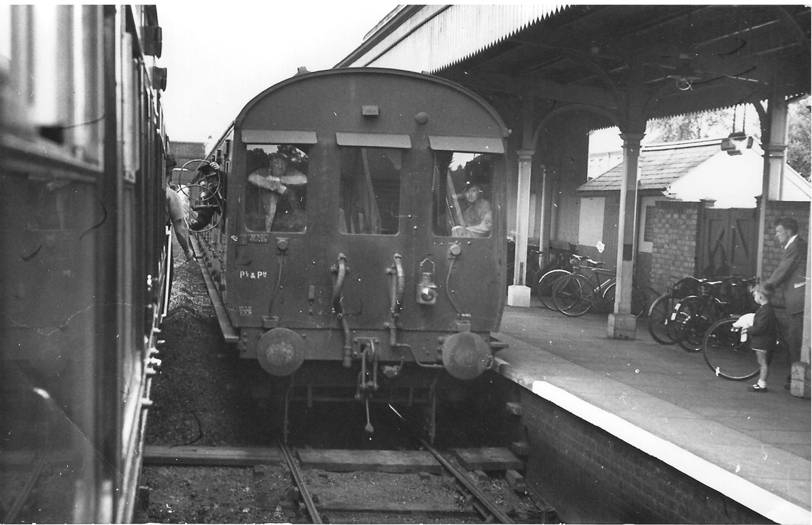 “Both my father and I worked in London, travelling six days a week on the branch line to Watford, at a time when the peak hour service gave three trains an hour between St Albans and Watford Junction, reducing to an irregular hourly service at other times. Scheduled time to Watford Junction was eight minutes. There was one through train to Euston, the 7.52a.m….Our access to the station was the bridlepath from the Oak Avenue to the small bridge over the line to what we called Station Road. Usually we dashed down the ‘exit’ slope of the down platform and over the footbridge. This exit was presumably installed for the use of the patrons of the old fairs. The bridlepath was then both muddy and unlit – we carried torches in the darker season and spent a fortune on shoe polish. …Changes took place on the branch line when for a period in the late fifties it was operated by A.C.V. lightweight diesel units. Their speed was sufficient for the job but their four-wheeled construction gave a very bumpy ride.” 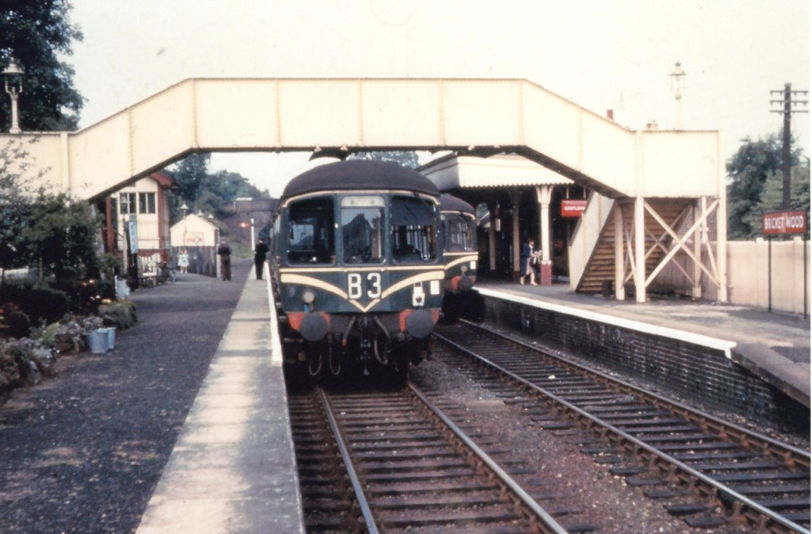 “Lady Yule once purchased some highland cattle which travelled down by train until finally shunted into the sidings for unloading. They had not been accustomed to being confined to small pens, so promptly burst through the fencing to roam at large in Bricket Wood before finally being tracked down and captured.

The sidings were also used for delivering coal to the coal yard. Two coal wagons were attached to the rear of the passenger train from St Albans. On arrival at Bricket Wood, the passengers for Watford would climb on the train and wave goodbye as it set off. However, a short way down the line, the train would stop, then reverse to shunt the two coal wagons into the sidings, before finally setting off on its journey proper.”

“Lady Yule had a lot of very fine horses. The railway horseboxes had to be cleaned by the station staff, then an available train would come and pick them up. In the meantime the horsebox was pushed manually on to the siding. Jeffords coal also came from Watford and the same method of unloading was used as for the horses.”

“Racehorses also came by train in horseboxes coupled to the back of the train. Before they reached the Bricket Wood platform, the train stopped and we unhooked the horsebox. We had a key called a token which fitted in a pouch. We used this special key to guide the horsebox into the siding where Jeffords Coal Merchant was. There was a special drawer at the side of the track where this token was fitted. We pulled the drawer out, dropped the token in and it released a signal lever to release the points for the horsebox to go in the siding. The horsebox stopped at the dock, we dropped the door and the racehorse came out opposite ‘The Fox and Hounds’ Pub. The builders merchants are there today. A horsebox was sent by Lady Yule and the horse travelled to her estate in that.”

“Sometimes salmon came in baskets on the train from Watford and other eatables were also sent by train. I used to deliver these things to Lady Yule on my bike.”